Home » Humanist Econometrics » The Case for a New US Economic Deal

The Case for a New US Economic Deal

A New Economic Deal for the United States

It is high time for a new branch of economics to emerge, one that focuses on and works for the largest number of end-users in the economy. (Other words for end-user are; citizen, voter, consumer, worker, contributor, mentor)

Q: How to make a country strong?

A: Empower every contributor to that nation’s success.

That’s how to get the economy firing on all cylinders.

How do I know this? Look back through America’s history, and note the times of positive growth (not only economic, but knowledge and social growth) and see how well it worked then…

The stock market crash of 1929 was merely an aberration due to simple regulatory deficiencies and since then it has loomed too large in the minds of economists, politicians, and the public.

There was nothing wrong with the socio-economic model then that a bit of regulatory adjustment couldn’t have prevented.

In the FDR years, the socio-economic model was improved because President Franklin Delano Roosevelt fixed only the parts that were broken on an almost perfect socio-economic wheel.

FDR gave us ‘the New Deal’ which in essence repaired the social contract between the government on the one hand, and contributors to the economy on the other hand.

In our time, we need ‘a deal that puts citizen economics first’ which I would characterize as ‘Humanist Econometrics’ or the ‘Fair Deal’.

Globalization for globalization’s sake, and the ‘trickle-up’ economy are presently working to strip wealth from the bottom 4 quintiles and move it to the top quintile which will result in a completely broken economy.

At present rates of ‘progress’ by 2030 some 75% of the world’s wealth will be concentrated in the hands of the 1%. (You call that progress?)

Which is why we need Humanist Econometrics to take over and make adjustments to the economic model. Running the world economy for the benefit of the 1% who play in the derivatives market and (rentiers) in the Chinese real estate bubble market, will result in a socio-economic collapse of unprecedented proportions.

In reality 2030 is only 10 fiscal years away. This year is already done, next year is already spoken for. By the time legislation gets written and passed we’ll be at fiscal year 2018 and those changes will hit the street in 2019.

Hey! Is anybody listening? We need to act now!

We need to change the tax structure so that those reporting less than $25,000 per year on their income tax forms don’t pay any tax, consequently we will save billions on social services expenditures including SNAP, welfare payments to millions of part time minimum wage workers, and other costs.

We need to focus on increasing money velocity among the bottom 3 economic quintiles.

“The function of credit in a simple society is, in fact, remarkably egalitarian. It allows the man with energy and no money to participate in the economy more or less on a par with the man who has capital of his own. And the more casual the conditions under which credit is granted and hence the more impecunious those accommodated, the more egalitarian credit is.” — Money: Whence it came where it went — by John Kenneth Galbraith

We need to ensure FDIC is operating perfectly AND we need to lower the threshold at which banks can lend out money to zero. Yes, banks should be allowed to lend out 100% of their funds without holding statutory reserves.

See Per Kurowski’s excellent blogs and videos on this and related topics.

Doing so would correct the present regulatory imbalance in every bank’s loan portfolio, redirecting them to more lending and more diversified lending, and each bank would be able to determine their best mix of loans on a monthly basis.

However, those who purchase on the stock market should be required via SCC regulation to own a minimum of 25% of their purchase (cash, or letter of credit) to reduce the chances of another stock market crash similar to 1929, due to over-leveraging.

(Yes, there would be a lot of complaining for a month then it would be over. On balance, we would never risk another 1929-style crash)

And we must (obviously) work on the tax structure, repealing the President Ronald Reagan and President George W. Bush tax cuts which created the 1% in the first place — but which were the right policies at the time.

But continuing to make the 1% richer and richer by sucking all of the wealth in America upwards, will result in one inescapable conclusion — irrevocably ruining the economy for all, the 1% included.

And we see how slowly the system changes… 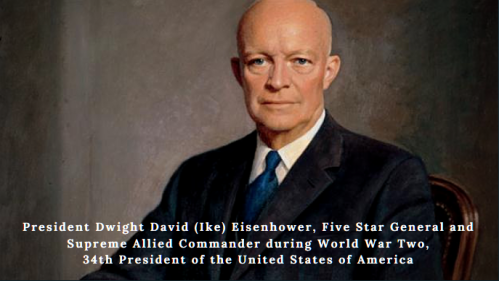 Ike Eisenhower was the last Republican president to balance the federal budget. He paid down the national debt. He spent money to create jobs. Eisenhower’s Interstate Highway system (begun and completed on-time and on-budget during his first term) returned more than $6 in economic activity for each $1 it cost. He did not lower taxes, cut spending, kill jobs, or increase the national debt. President Ike Eisenhower was America’s last fiscal conservative!